Take a stroll around the Quay Road from Hotel Newport and discover Newport's Quay, Harbour and Princess Grace Park - a one mile loop full of heritage and history.
The loop is exactly a mile to walk around and today, the harbour is utilised by fishermen and leisure users, as well as playing host to raft races and other watersports events over the summer months.
At the point of the Quay is the entrance to Princess Grace Park, a lovely woodland park. If you continue along the Quay Road, to loop back into the town and pass the stately façade of Newport House. 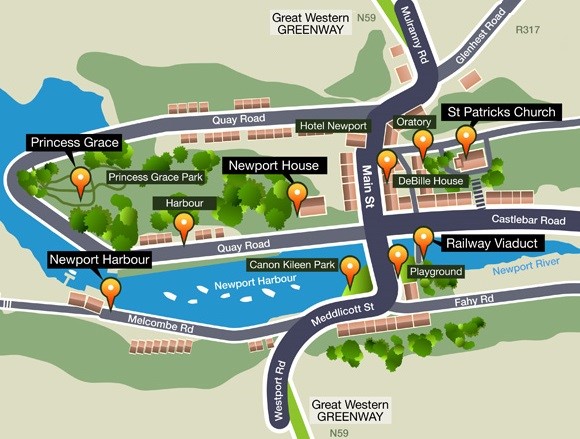 Actress and Princess Consort of Monaco Grace Patricia Kelly was born on November 12, 1929, in Philadelphia. Her Father, John Brendan “Jack” Kelly, came from a family of Irish immigrants, who emigrated from our fair town of Newport Co. Mayo. Grace’s path through life eventually brought her back as royalty to Newport in 1961 accompanied by her husband, Prince Rainier Grimaldi III of Monaco. The couple stayed at the elegant Newport House. Grace reportedly bought her family home and surrounding land for £7,500 Irish pounds from the Mulchrone family in April 1976, planning to build a holiday home there. The humble home of the Hollywood royalty is Newport's rather impressive claim to fame. The ancestral homestead can be found on the edge of the town in Drimurla, although all that remains there are the lonely ruins of a small thatched cottage.
She returned later that year, attended Mass in St, Patrick’s Church, shopped and had her hair done in Newport, and returned again in 1979 with Prince Rainier to see architectural plans for the holiday home. She told the local press that she would return in a few years to see the home finished, but she died at the age of 52 on Sept. 14, 1982, when her car left a winding road in the cliffs of Monaco. Local residents sent a wreath of wild flowers – picked around her ancestral home in Drimurla – to Monaco for the funeral.
At the point of the quay in Newport there is a park, which used to be part of ground of Newport House where she enjoyed a morning stroll during her stay there, which is now named after Princess Grace. The wooded park is worth a visit during your stay at our hotel.

The History of Newport Quay

At the turn of the 18th Century a former Treasury official named Captain Pratt leased tracts of land in Burishoole from the Medlycott family with a view to developing a linen trade. He developed a new town and new port named Newport-Pratt. The person who oversaw the building of the Quays was James Moore, land agent for the estate. At this time the harbour appears to have been a busy port. Records show ships of French and German origin arriving here. The harbour was part of the backbone of the Carey family’s business in the town in the late 1800s and early 1900s, through which materials were imported and exported.
In 1782 a Danish Frigate 'Bornholm', which had left Copenhagen for the Danish West Indies, was blown by a storm into Melcombe Bay. The fever stricken crew were hospitalised in a building in Melcombe. The captain, Mathias de Bille was befriended by local merchant John McLoughlin and it was in John's house on main street that the captain died. The Danish Royal family later financed the building of De Bille house on Main Street.